Overall business confidence in the United Kingdom increased in January for a fifth consecutive month, rising 13 points to 23%. At the same time, economic optimism surged to 23% from 2%, an 18-month high.

The survey, the first to be taken after the December General Election, shows the 13-point increase took business confidence to 23% in January. This is a 14-month high and rising back towards the long-term average of 25%. 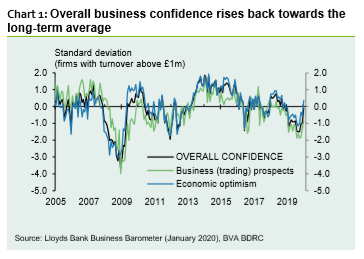 The boost was largely driven by firms reporting an improvement in economic optimism, which leapt to 23% from 2%, the highest for a year and a half.

Overall business confidence is calculated by averaging the views of 1,200 companies on their business prospects and optimism about the UK economy.

January saw a rise in trading prospects, increasing four points to a seven-month high of 22%.

The buoyed outlook continued to be reflected in firms’ assessment of their own hiring intentions. That estimate showed a further increase of three points to 15%, the highest since December 2018.

The proportion of firms expecting higher staffing levels remained unchanged. A third of businesses (34%) still expect to increase employment. Those anticipating a reduction decreased by three points to 19%.

Divided views on impact of Brexit

Concerns about the UK leaving the EU eased significantly this month. Business Barometer showed an eight-point increase to minus 7%, the least negative since November 2018.

Businesses’ views on the impact of leaving the EU remain divided. 27% of businesses believe the UK’s exit will have a positive impact (up from 24%). 34% (down from 39%) continue to expect a negative impact.

“After a turbulent 2019, it is encouraging to see a solid rise in overall business confidence to start the new decade. These results, if sustained, could signal a stronger economic growth at the start of 2020, although risks to the central outlook remain.”

Confidence across regions and sectors

Ten out of twelve regions recorded a rise in overall confidence this month. London was the most confident region (38%), rising 22 points, followed by the South West (34%).

The East Midlands (31%), the North West (26%) and Northern Ireland (25%) were also above the UK average of 23%. Scotland was the least confident region with a decrease of 15 points to -4%, moving it into negative sentiment.

Confidence in the retail sector increased by two point to 24%. The manufacturing sector saw a decrease of six points to 21%.

This survey was conducted with 1,200 companies between 2-16 January from all sectors and regions of the UK.