The latest quarterly UK current account switching statistics are released today and as always are worth a glance.

First off, on a positive note, the seven-day switching service is administered with admirable efficiency. It is a slick operation and credit is always due to Pay UK and to the participating 47 UK banking brands for the smoothness of the operation.

The service has completed 99.7% of switches within seven working days. In Q2 2022 awareness and satisfaction levels were broadly in line with target, sitting at 74% and 90% respectively. Not for the first time in this column it is appropriate to say: Take a bow Pay UK.

UK consumers may elect not to switch their existing current accounts for a number of reasons-apathy arguably being a prime reason. What is not the case is any failure on the part of Pay UK and the UK banking brands to publicise the availability of seven day switching.

Nor can anyone suggest that public concern over the efficiency of the service is a reason not to switch.

As for the todays numbers: in brief, no great surprises. The brand-by-brand comparison released today relates to data for the first quarter of 2022, so switches completing between 1 January and 30 June 2022 and is therefore three months in arrears. NatWest is the biggest winner, with net gains of 19,464, ahead of Nationwide (+12,503) and Starling (+11,888). So by this metric, 7 day switching, Starling is easily beating rival Monzo once again, though the latter brand is also up (+3,221). HSBC (+5,176) also posts a strong quarter.

NatWest switching gains will have been boosted by its account opening incentive of £150, up from £100 last year.

On a slightly more sobering note, the success of seven-day switching has done nothing to boost overall annual switching. In the past 12 months (1 July 2021 to 30 June 2022) there were 850,243 switches. 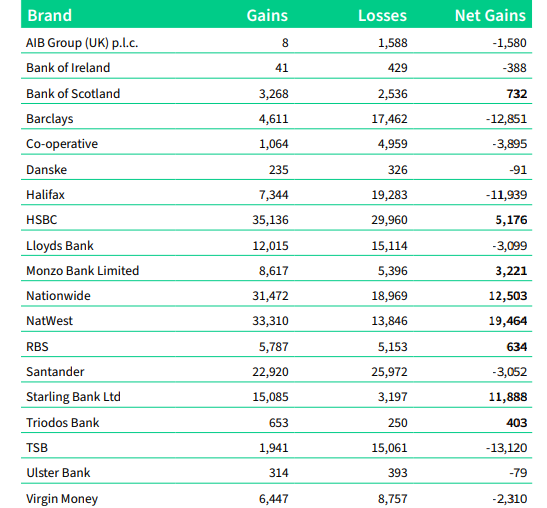 It may be that the cost-of-living crisis and the availability of switching incentives will kick-start switching. But it may also be the vase that the majority of customers elect not to switch their account for one simple reason. Namely, that they are satisfied with their existing provider.