An independent survey asked retail banking customers whether they would recommend their bank to friends and family: their answers reveal how banks have performed over the last 6 months since February 2020.

The results are only published where at least 100 customers have provided an eligible score for that service in the survey period.

Customers were asked how likely they would be to recommend their personal current account provider to friends and family.

Challenger bank Monzo retains the crown it achieved last year, when it toppled previous winner First Direct (styled first direct), to take the top spot in overall service quality. 86% of respondents would encourage friends and relatives to sign up with Monzo.

first direct, a telephone and internet-based retail bank division of HSBC, came in third this time (83%) following mobile-only challenger Starling bank in second place (which boasts 84% of customers willing to advocate for it). 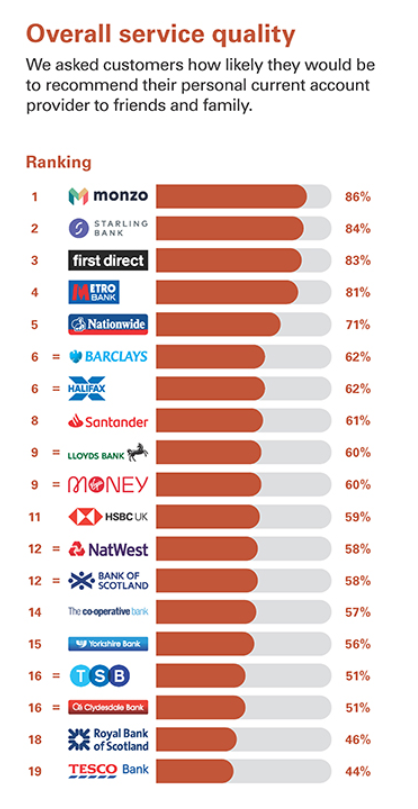 How likely would customers be to recommend the bank’s online and mobile banking services?

Here again, the usual suspects occupy the top ranks: Monzo with 89% of customers likely to recommend it, and Starling bank (88%) close on its heels. Metro Bank, the embattled retail and commercial bank which nonetheless seems to retain customer loyalty, took third place (85%).

How likely would customers be to recommend the bank’s overdraft services? 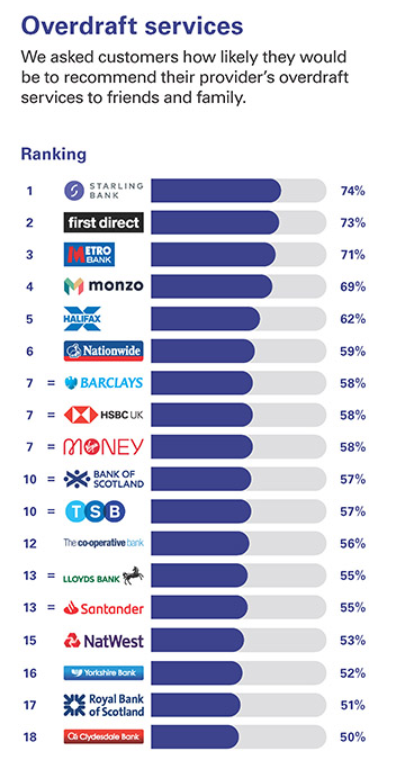 How likely would customers be to recommend the bank’s branch services?

On this score, there are some changes in the top slots. Metro is top ranked (84%), and Nationwide (77%) is second, having moved up from last year’s third place. Money (74%) comes third.

It’s worth noting here that first direct, Monzo, Starling Bank, and Tesco Bank do not operate a branch network. 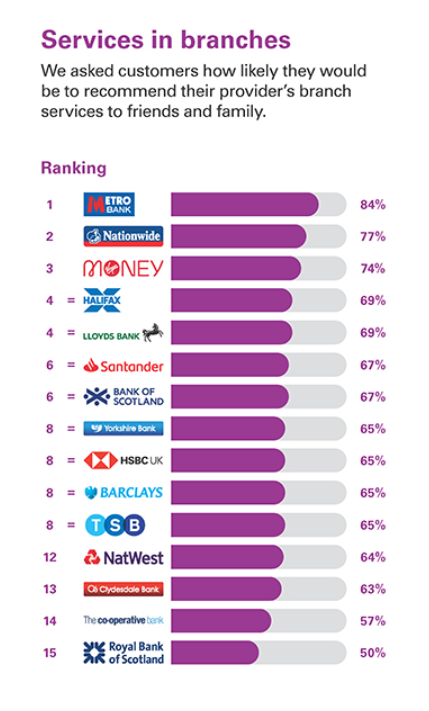 In total, 19,141 bank customers were surveyed in Great Britain.

Customers were asked how likely they would be to recommend their personal current account providers to friends and family.

Nationwide, the world’s largest building society, takes first overall place with 76% of customers willing to endorse it. HSBC UK, a bank that has been dogged by below-average customer satisfaction scores for a good number of years, ties with Barclays at 68%. 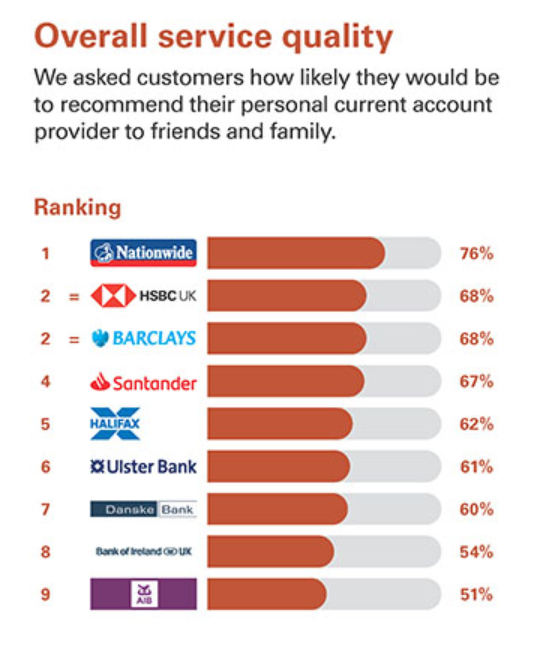 How likely would customers be to recommend the bank’s online and mobile banking services? 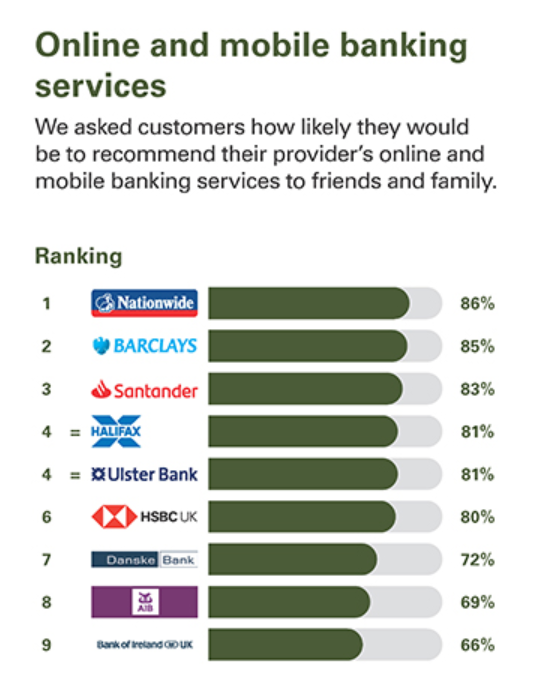 How likely would customers be to recommend the bank’s overdraft services? 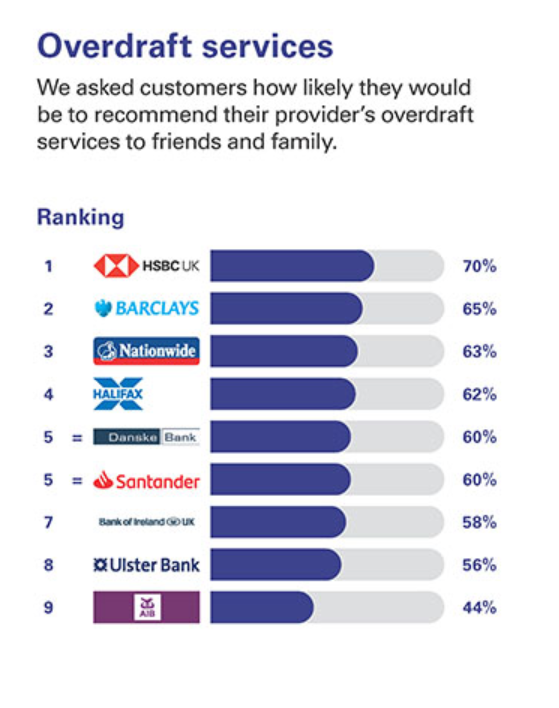 How likely would customers be to recommend the bank’s branch services? 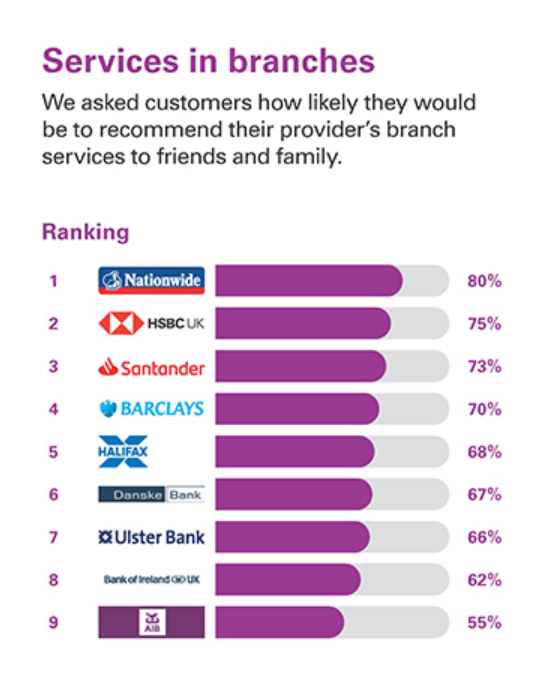 In total, 4,545 people were surveyed in Northern Ireland.

“These new findings illustrate that consumer attitudes have shifted in regard to banking, with more people than ever recognising the benefits of a bank that prioritises digital services.”

Johnson argues that fintech and online services have taken on greater importance throughout the COVID-19 crisis, “as remote and mobile access shifts from convenience to necessity.”

Banks that are still trying to operate legacy systems, he said, must understand that they have a responsibility to provide this seamless experience at all times, “which has been the catalyst for many pushing their digital transformation initiatives to the top of the agenda.”

Today marks the fifth publication over 3 years of the service quality league table of personal and business current account providers, put in place following the Competition and Markets Authority’s (CMA) market investigation into retail banking in 2016.

For the first time these new publications include the service quality rankings for the new digital banks Monzo and Starling and for Virgin Money.

Results are updated every six months, in August and February.

Iceland eyes divesting up to 35% stake in state lender Islandsbanki

Canadian banks’ quandary: how to spend a $70.4bn spare cash