The largest European banks can reduce IT spend on core banking technology by 9% annually, by moving to ‘last generation’ solutions. But as Ben Snowman of Mambu tells RBI, when banks move to a modern ‘next generation’ cloud native banking platform this can rise to 50%.

Moreover, banks can successfully balance the benefits and risks to build the organisational confidence to proceed. Technology is the enabler of competitive advantage says Snowman. Since the financial crisis of 2008, there has been a steady wave of competitive, economic and regulatory change. This has altered the face of the banking industry.

Much has been made of the changes to the competitive environment. There are now more than 300 neobanks worldwide. Big tech has entered the race and VC investment in fintech hit $13.4bn in Q121.

Says Snowman: “However, competitive forces have only contributed 25% of the commercial challenge faced by banks in the last decade. “The remainder comes through a blend of low interest rates, sluggish economic growth in and increasingly sagacious regulatory policy.

Pandemic accelerates the need for banks to up their investment

Since Covid-19, these challenges have all been exacerbated, compounded, for the long term, by one additional factor – customer expectations.  62% of European customers now express an interest in switching from physical to digital banking. That is a rise of 13 percentage points in three years.”

He adds that pandemic has created a necessity for banks to upgrade their investment in technology – front to back. They must deliver an excellent experience, increase product development and innovate by embracing industry developments such as open banking.

“The need to invest in technology has never been greater, despite the economic turmoil of 2020.” 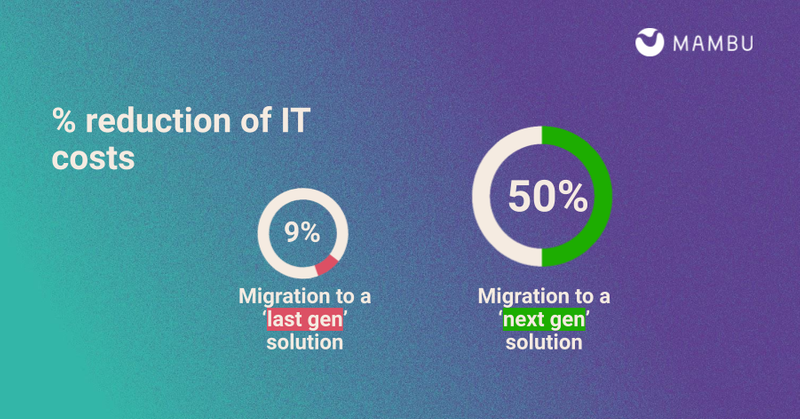 For large, traditional banks, technology budgets remain robust while the pace and quality of change remains a challenge. One of the single biggest reasons for this is the reliance on legacy core banking technology.

Citing cost, complexity and barriers to integrating with new technology and third parties, legacy core banking platforms are expensive to maintain, hard to adapt and adversely affects customer experience and operational effectiveness. Replacement of the core platform carries economic and competitive benefits yet comes with risks.

Of the largest 100 banks, 37 are in Western Europe. Their annual IT budgets account for an average of 0.28%* of assets, constituting $88.4bn. Of these budgets, 16-30% is spent on core banking platform maintenance and development equating to $14.3bn to $26.8bn. Core banking platform replacement, to a ‘last generation’ solution can reduce IT costs by 9% releasing $1.3bn to $2.4bn per annum.

Where banks have migrated to ‘next generation’ cloud native banking platforms, their IT costs  associated with the ‘core’ have reduced by c. 50%**. This is driven by the elimination of protracted upgrade cycles (c. 35% reduction in IT headcount), faster and cheaper launch of new products (c. 80% reduction in time to market) and simplification of the application landscape through modern architectures.

The payback time is also much quicker – typically within 12 months compared with ‘last generation’ platforms where payback exceeds 4 years.

In addition to the economic benefits, a modern digital core banking platform can increase the pace of innovation through faster product development, accelerated deployment of superior digital journeys and integration with third parties and new technologies.

While 70% of banking executives are reviewing their core banking strategy, only 5% of banks modernise their platforms each year. This is because the perceived risk of failure outweighs the benefits. However, many banks continue to rely on legacy IT systems implemented in the 1970s and 1980s and the necessity to modernise is approaching with great speed.

There are five key principles which minimise the risks of core banking platform modernisation. When followed, banks can embark on their re-platforming with confidence.

There are three main approaches to replacing the core banking platform. The first approach carries the highest risk, highest cost and is the slowest, which is to ‘rip and replace’ the platform. The second, a modern approach, is to run a dual core in which journeys, capabilities and customer cohorts are slowly migrated on to the new core. This approach takes longer yet has a far lower chance of failure and requires lowest investment in the long term.

The third approach is an ancillary benefit of the digital speedboats, several of which have been launched in the last five years. This involves setting up a greenfield tech stack, used for new customer acquisition, often under a new brand, then carving out the legacy core on to the new tech stack. This approach tends to be the fastest, where experimentation can be carried out in a safe and controlled environment because of the distinct brand. With time, once the new brand finds product/market fit, core migration can take place. These second two approaches require running a dual core, which is becoming increasingly common.

The most proven digital core banking platforms run on a single code base for all clients. By using a no code / low code approach to deployments, the effort in re-platforming is placed in configuration and training. This minimises the risk of failure of custom code and the need for large teams (and costs associated therewith) to test and regression test new capabilities.

Continuous delivery on a single code base

Frequent code upgrades, made possible with new digital architectures, increase a bank’s ability to launch new features and capabilities quickly and regularly. Being untethered from quarterly code upgrades, which arise from the need for extensive integration testing across complex architectures, banks can accelerate their pace of innovation and drive differentiation. This effect is compounded when using a modern, highly flexible configurable platform.

The banking industry has been slow to adopt public cloud, with UK executives citing data security (87%) and regulatory risk (67%) as their primary concerns, even given the proven benefits of increased speed to market, agility and cost reductions. However, the tide seems to be turning; a consortium of leading banks in Europe has come together (the European Cloud User Coalition – ECUC) to create the framework to facilitate adoption with confidence.

Closer alignment between IT and business

34% of technology spend at banks is governed by Business Units and not IT. Therefore, to deliver business, customer and operational objectives, the alignment between these two ‘sides’ needs to be closer than ever. New customer journeys, propositions or controls, such as AML and KYC, need to be architected and delivered, front to back, from the outset. This calls for the need to adopt agile ways of working – something banks such as ING and DBS have done effectively.

In summary, the window to replace core banking platforms is closing and the benefits of doing so are evident and significant. Once banks are clear of 1) their platform of choice, 2) their target architecture and 3) their migration strategy, they can move forward with confidence.