Snapshot for week beginning 7 March. If last year was not a year to make a deal, 2021 is shaping up to be a big year for bank mergers and acquisitions.

Only 112 bank mergers were announced in 2020, down 60% from a year earlier and the lowest annual tally in nearly a decade, according to data compiled by Keefe, Bruyette & Woods.

Several of those that were announced were ultimately terminated after the pandemic hit.

Understandably, deals hit the brakes as the impact of the pandemic became clearer and banks necessarily shifted their resources and operational focus toward a Covid banking response.

Further, bank valuations took a big hit during the pandemic, leaving many banks that may have previously wanted to merge waiting for their assessed value to go back up before even considering inking a deal. 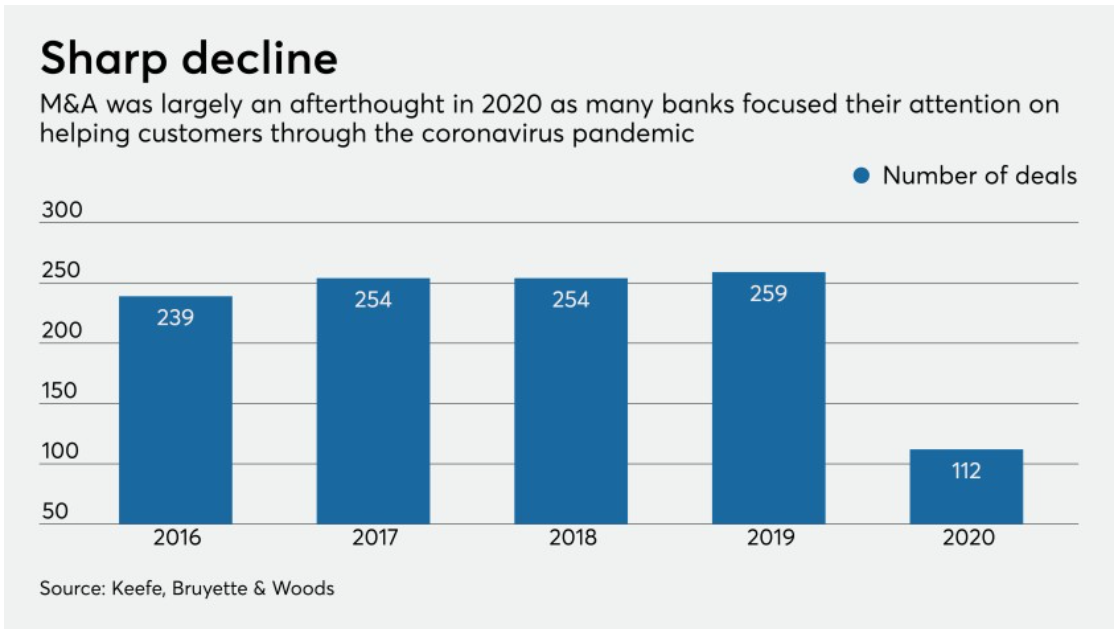 Now, with Covid vaccines offering hope, prospects are looking up, and mergers and acquisition activity are beginning to pick up steam.

Our featured deal of the week is a US transaction in which a Delaware bank acquires a suburban Philadelphia bank and wealth management company in a stock deal.

Deal of the week: WSFS Financial Corporation to combine with Bryn Mawr Bank

Bryn Mawr Bank in Pennsylvania and Wilmington and Delaware-based WSFS Financial have agreed to merge in a deal worth about $976.4m. The combined bank will have about $20bn in assets.

The sale price works out to $48.55 a share, to be paid Bryn Mawr shareowners.

That’s up about $6 from its trading value in recent days, nearly double its low from last year’s recession, and almost even with Bryn Mawr shares’ all-time high in 2017.

The deal makes WSFS “uniquely positioned as the only locally headquartered bank with the size and scale to compete with the big guys,” said WSFS chief executive Rodger Levenson.

With nearly $20bn in loans and other assets, and more than $40bn in client investments, the banks will also control nearly 7% of bank deposits in the Philadelphia region, the fourth-largest banking market in the United States, according to FDIC data.

These between them have bought up all of Philadelphia’s historic major banks and cut more than 20,000 Center City jobs since the 1980s.

WSFS employs 1,900, Bryn Mawr about 600. The buyer plans to close about one-third of the companies’ combined 140 bank branches, including competing locations that will now be part of the same owner.

Levenson said he expects to cut about 250 “overlapping” jobs as part of the takeover, at an upfront cost of $127m in severance and other expenses, for annual savings of $73m a year.

A downturn in deals throughout 2020 meant that many banks paused efforts for growth, a position that can only be sustained for so long.

Now, the challenges and changes wrought by the pandemic have a flip side: new opportunities for growth.

Three factors have fuelled previous surges in bank M&A — low interest rates, a need to cut costs and the need to invest in technology.