The past 12 months have challenged investors’ nerves. As we enter 2023, the big question everyone wants to be answered is: how long is the market downturn going to last and when will we start to see a recovery?

Such queries have no easy answers, but if we want to have a clearer look of what lies ahead, we should focus on three fundamental factors: economic growth, inflation, and monetary policy (a by-product of the first two).

When will the recession strike?

If we think about economic growth, 2022 has been an odd year. Over the last few months, we have witnessed a constant deterioration of sentiment indicators. The latter however are surveys and, as such, they may reflect the perceptions of the corporate representatives that are being interviewed rather than the reality of the economy.

The drop in mood of economic operators has not been coupled with a widespread worsening of economic performance (especially in the US and continental Europe). Hard data (eg: consumption, job market data, inventories, unemployment rates, car registrations, real estate deals) have been marginally positive in the US and above average in Europe.

Does it imply that business managers are being too pessimistic? That would be an oversimplification. It is fair to say that the unexpected surge in inflation has created an unprecedented situation that caused uncertainty and businesses to panic. We should not forget that sentiment data tends to anticipate economic trends.

Having avoided a recession so far, this does not mean we will not have to face one at some point during 2023. The good news is that the expectation of a recession has already been factored in, even if probably just partially. Prices and valuations have dropped, despite listed companies having managed to keep revenues stable.

Once again, there seems to be a discrepancy between reality and perception. So, what are we expecting for the coming year? The scenario of a recession has never been so keenly anticipated – with its probability being estimated at 80% in the Eurozone and 65% in the US.

Perhaps counterintuitively, this may be good news for investors. A slowdown in economic activity (if mild, as even the most pessimistic projections indicate it will be) will reduce the upwards forces on prices and ease the pressure on Central Banks to tighten monetary policy. 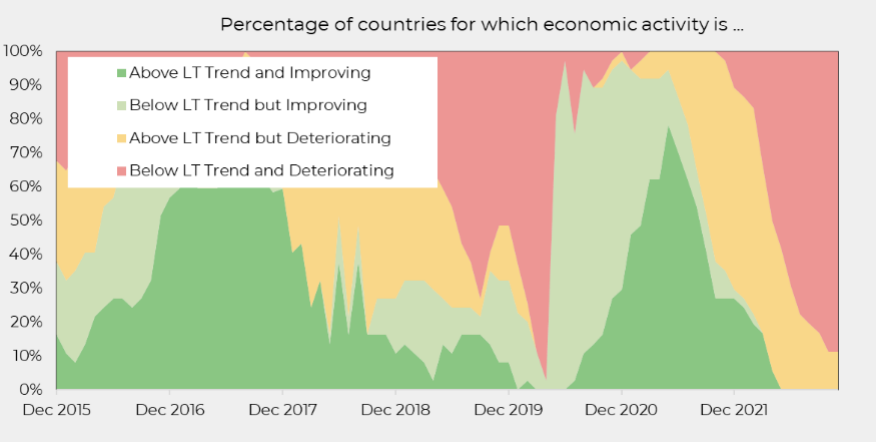 Inflation: will inflation continue to slow?

Let’s now turn to inflation. The rise of prices over the last 12 months has pushed central banks to raise rates quicker than they would otherwise liked to, given the current economic environment. This has increased the cost of debt and the cost of money, thus negatively affecting both fixed income and equity. On top of that, there have been plenty of supply issues such as problems in global logistics and high energy prices.

These matters are particularly concerning as monetary policy has little ability to control them. As we enter 2023, the general expectation is that prices will gradually normalise. 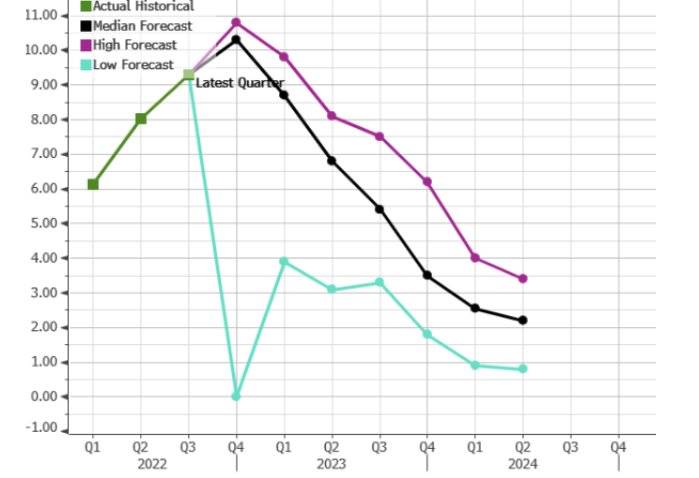 It may be premature to say that inflation has been tamed, but it seems clear that its trajectory has become more predictable. Over the past few months, markets have panicked over the idea that price growth could go out of control. Yet structural improvements and positive policy feedback are reducing inflation surprises, opening up a more positive scenario for investors.

The slowdown of inflation is reducing pressure on central banks. The chart below illustrates the rolling forecast of rate hikes for the next year: we can see a drop in the US coupled with good news coming from inflation data. The charts show that monetary tightening is reaching its peak both in emerging and developed economies.

As more time passes and central banks create some room for manoeuvre (in case the economy would need a boost in the near future), the focus will be shifting to the economy rather than prices. Similarly, as the weeks wear on, the less likely we are to find ourselves in a scenario where a recession strikes with inflation out of control and interest rates too low. Will central banks have enough capacity to step in and support the market?

The consensus seems to be positive, especially in the US. As things stand at present, it appears that central banks are still on a trajectory that could make a relatively soft landing feasible, but the plane has not touched ground yet, and many things can still get in the way.

Where does this leave us?

We believe that a potential overestimation of the Federal Reserve’s ability to strike inflation is amongst the most pressing risks.

Moreover, there is the possibility of a stronger than forecasted recession which could create some instability within the financial system. Pressure on earnings will mount as the economic situation will deteriorate, and companies may prove to be less resilient. In addition to this, the real estate markets are under some pressure in various developed economies including the UK. Finally, there are political and geopolitical challenges that cannot be overlooked.

On account of all the above reasons, the investing environment remains challenging. We do however see the potential for long-term returns in the current market nonetheless. Market valuations are decently appealing and look better now than almost any other time we have run our strategic asset allocation, especially for bonds. This should cheer long-term investors.

Before increasing the risk exposure of our portfolios, however, we would like to see markets continuing on the promising trajectory that we have witnessed in the past few months. Our challenge is to balance long term perspectives with short term risks, both in regards to duration and equity exposure. We will try to weigh these objectives to provide investors with the best possible outcome.

Roberto Rossignoli is Portfolio Manager at Moneyfarm, the European digital wealth manager with more than 90,000 active investors and almost £2.5bn in assets under management