In an effort to regain full control of China’s financial services sector, the Communist Party (CCP) is likely to tear up the country’s previously laissez-faire attitude to fintech, choking off long-term innovation in the sector.

For most of the past 40 years, the story of the Chinese economy has been one of liberalisation, growth, and success. The same is true for fintech in China, with the highest volume of fintech funding in the world in 2019 being the result of a free and business-friendly environment that created “a safe zone for start-ups to test new applications and ideas,” according to Swift’s Michael Moon.

However, the last few years in China have seen major change. Premier Xi Jinping has sought to increase his control within the country, removing the two-term limit and reanimating a sense of nationalism, designed to shore up support for both the CCP and him personally.

Now, Xi Jinping has his eye on China’s burgeoning fintech sector, though not as the promising success that it is but rather as a threat to the party’s political power, exercised by the increasingly redundant state banking system.

GlobalData’s Global Retail Banking Analytics database has shown that the market share of Chinese state-owned banks has fallen considerably over the past 10 years. 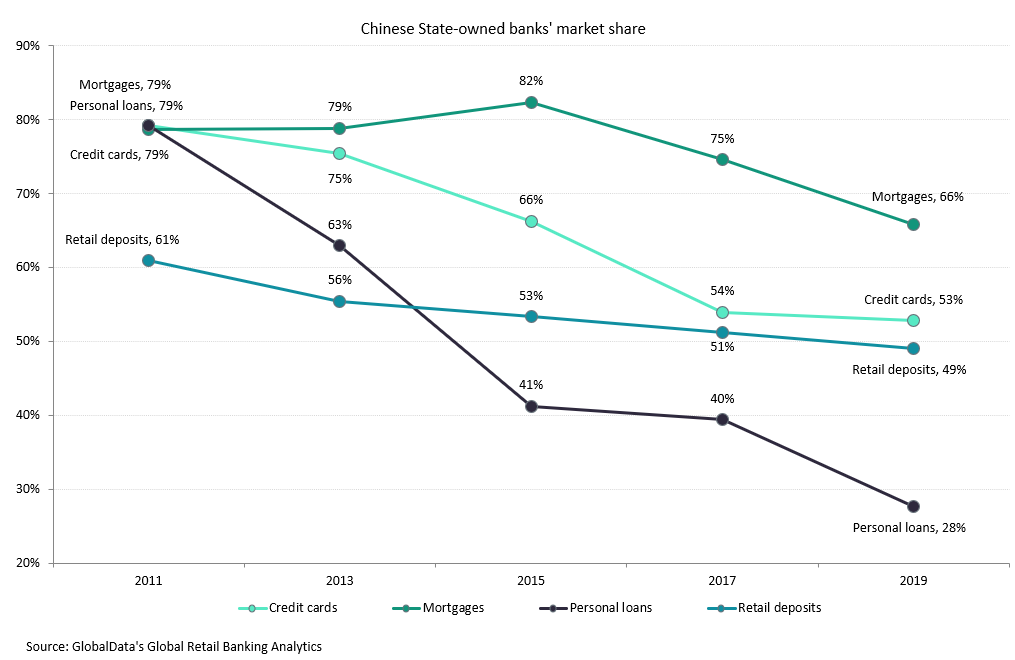 However, the conventional private sector banks have not taken this share, particularly with personal loans. Instead, market share has shifted to a wide range of newer players, such as the country’s large but increasingly targeted peer-to-peer lending sector. This includes loans made by WeBank and Alipay.

Regaining these lost levers of power over financial services will make it easier for local and central government to control access to financial services. The first shot has already been fired with the rebuttal of Jack Ma’s criticising of the recent regulatory environment and the threat to break up Ant Financial into its respective banking, payments, and insurance businesses. However, far from being an isolated case, this is likely part of a much bigger plan to reassert China’s state-owned banks as the country’s main route into financial services for businesses and people.

Additionally, the fact that regulators were prepared to stop the Ant Financial initial public offering at a moment’s notice and decide it was time to start changing its regulatory regime shows that no one is safe from interference, even if their crime is to be too successful.

The culmination of these events and policy changes are unlikely to be felt immediately, however. China is still a large, prosperous, and growing market, and with a unilateral though small liberalisation of rules for foreign investors, fintech in China is unlikely to go the way of its predecessor banks in the 1950s with a total shutdown. Instead, these rules will lead to less innovation, less desire to argue with regulators, and much less incentive to become a big or successful fintech player.

In an attempt to hold power forever, the CCP is likely to continue tightening its grip on the country’s financial system. This marks a turning point where, for the sake of ‘political stability,’ China is prepared to sacrifice its innovative fintech safe space. However, while the pace of innovation is likely to diminish in China, other states including Singapore, Japan, South Korea, and Australasia are likely to benefit.

HSBC’s TransferWise alternative shows how to fend off challenger threat