In 2018, Banorte became the second largest financial group in Mexico, digital helping to show continued improvements to its return on assets and cost-to-income ratio.

Banorte has shown continued improvements in its financial performance since 2010. Since 2010, it has consistently outperformed the Mexican average in cost-to-income ratio by an average of 12.1 percentage points and in return on assets by an average of one percentage point. Over this time, it has also shown increases in its market share over all four products: personal loans, credit cards, retail deposits, and mortgages.

In 2018, Banorte continued its focus on making customer-centric improvements to its mobile and online banking functionality, introducing 15 new functions to its digital platform. The biggest new release was the introduction of its virtual assistant, which is powered by IBM’s AI solution, Watson, and allows users to complete transactions through the assistant’s interactive chat function. The virtual assistant can also answer questions in the language they are asked.

Other new features introduced in 2018 include biometric authentication, digital cards, and cardless cash withdrawals at ATMs through codes sent to the mobile banking app. Alongside this, the number of customers who have used the app has grown from 963,777 in 2017 to 1,508,744 in 2018. According to our data, Banorte has also seen an increase in promoters from 61% in 2017 to 63% in 2019.

Another change that took place in 2018 with Banorte was the acquisition of Grupo Financiero Interacciones. However, this merger was not that significant as the 13% compound annual growth rate in Banorte’s total divisional assets since 2014 was just one percentage point higher than the Mexican average. 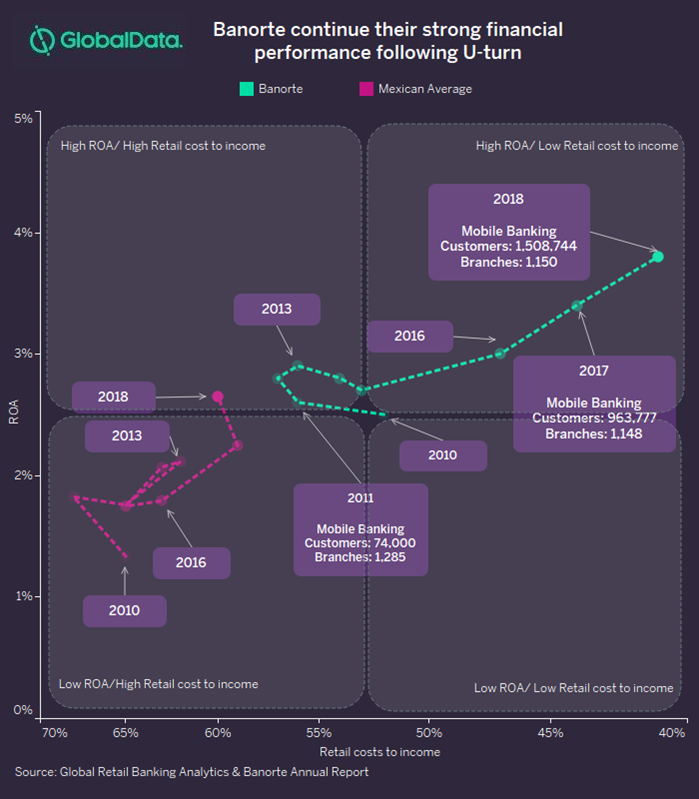