Earlier this month, CaixaBank and Bankia confirmed talks of a potential merger, a deal that could have significant implications for the banking sector in Spain and could trigger a new wave of consolidation in financial services, partly due to the disruption caused to small- and medium-sized providers by Covid-19.

While the merger in question will still see the likes of BBVA and Santander hold more assets under management and operate internationally, domestically the merger would significantly widen the gap between the three largest competitors and make the post-merger entity the largest lender by market share in personal loans and retail deposits, providing access to previously underserved regions and offering better access to scale operations in Spain.

For CaixaBank, which will preserve its brand and is the larger party to the merger, the opportunity to gain access to Bankia’s customer base seems the most obvious synergy of the deal. GlobalData’s 2020 Financial Services Consumer Survey shows that Bankia’s customers are more digitally engaged than the average customer in the Spanish market, and it would appear this level of digital sophistication complements CaixaBank’s existing customer base.

With regard to demographic, the customers of both banks appear very similar in terms of age and income structure, though Bankia has a slightly older and more affluent customer base that could serve to increase bank revenues in an economy where youth unemployment has traditionally been high.

Similarly, the recent performance of Bankia also makes merging with CaixaBank a prudent move given the relatively high cost-to-income ratio it has had over the last decade in the face of flat lined growth. While CaixaBank has a higher cost-to-income ratio than Bankia, relative to its total divisional assets and growth over the last decade, it is in a stronger position than Bankia, which has not shown meaningful signs of growth following its creation in 2010 from the ashes of several regional banks who were nationalised to avoid collapse. 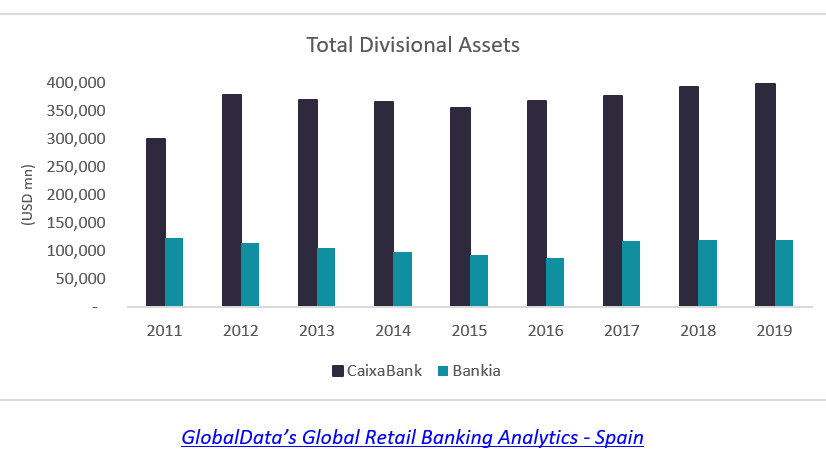 And while the boards of CaixaBank and Bankia have approved the merger, the deal still requires shareholder sign-off before completion, which is expected to take place sometime in November 2020. The prospect of anti-trust legislation in the European Union halting the deal is limited given the similar market shares of both Lloyds and Credit Agricole. However, it may be the case that difficulties in forecasting banks’ asset quality due to uncertainty caused by coronavirus may lead to a delay in the timeline of completion.