Companies are increasingly hiring for artificial intelligence roles in the retail banking and lending sector, but some parts of the world are proving more attractive than others, writes Michael Goodier

Artificial intelligence is an area which has seen rapid growth across a variety of industries in recent years – not least among major banks, central banks, and non-bank competitors.
Figures show that the number of new AI roles being advertised for these companies has increased in recent months, with firms across the industry looking to expand their capabilities.
The number of newly advertised roles stood at 7,451 in the first quarter of 2021. That’s up from 4,936 in the fourth quarter of 2020 and 4,584 in the third quarter of 2020.

The figures are compiled by GlobalData, which tracks the number of new job postings from key companies in various sectors over time. Using textual analysis, these job advertisements are then classified thematically.
GlobalData’s thematic approach to sector activity seeks to group key company information by topic to see which companies are best placed to weather the disruptions coming to their industries.
These key themes, which include artificial intelligence, are chosen to cover “any issue that keeps a CEO awake at night”.
By tracking them across job advertisements it allows the reader to see which companies are leading the way on specific issues and which are dragging their heels – and importantly, where the market is expanding and contracting.

Key companies are those tracked by GlobalData that are relevant to the major banks, central banks, and non-bank competitors sector. Text analysis is used to find adverts related to artificial intelligence positions.

Where are companies hiring for AI careers in retail banking and lending?

Looking across key major banks, central banks and non-bank competitors as tracked by GlobalData, the US is currently seeing the largest number of AI job advertisements.
Last quarter the country saw 3,209 advertisements, up from 2,284 in the fourth quarter of 2020 and 1,989 in the third quarter of 2020.
On a city level, Bengaluru, India had the most newly advertised artificial intelligence roles in the first quarter of 2021 with 322, followed by Singapore with 238, and Mumbai, India with 217. 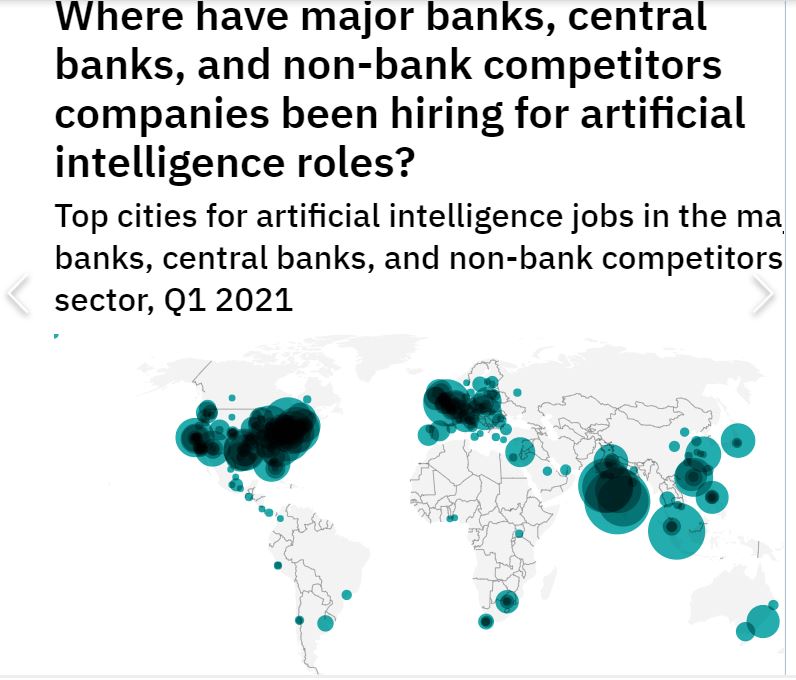 Where is seeing the most growth for AI roles in retail banking and lending?

The biggest growth area has been in India, which saw 560 job advertisements for AI in the fourth quarter of 2020, increasing to 1,411 in the first quarter of 2021.
In terms of cities, firms are increasing AI hires in York, with 44 roles in the latest quarter, up from zero in the previous one.